This article is part of a series of posts about medical devices software testing:

In my experience, writing and make pass the unit tests that act as guardians of a piece of code will take about twice the time required to write that piece of code alone. But that doubled time will include most of the debugging. As a developer, would you rather like to write unit tests or to debug? Would you rather fix things when they are fresh in your memory or two months later? Do you like to have your work really finished and move on to the next challenge, or be constantly caught up by your past and shameful mistakes? When somebody else breaks something in that functional area you’ve been working on some time ago, would you rather spend one day investigating their blunder to determine if it’s their responsibility to fix it, or instantly see in the CI what commit likely broke your unit test? Would you rather refactor constantly stuff you don’t like in your code or be paralyzed by the fear or breaking things in lesser-known areas of the code without any safety net? When you have to modify some code written by someone gone long ago, do you want to find it equipped with unit tests to help you get acquainted with the beast? I believe that automated tests are profitable, but on the long run. There is a quite high entry cost. Introducing automated tests late in a project is not quite so profitable. It must by a constant effort of everyone in the team with the goals of catching bugs, of inciting to decoupled design, of allowing design evolution by providing a safe environment for refactoring. But isn’t that exactly what we’re pursuing when developing medical devices? Good design, few bugs?

Anyway, the most economically interesting part with automated tests is that running them is cheap. Sure, some time will be required to take care of the production of all the servers and build agents, and to maintain the build scripts and build tools configuration in good shape. But this cannot be compared with the incredible cost of manual testing campains. Automated testing means putting effort in designing stuff, not repeating an effort which outcome is of very temporary value (until the next commit, or luckily the next version); it means climbing higher in the value chain. The very fact that it is so cheap allows the sheer number of tests run for every release to grow dramatically (compared to manual testing), which actually decreases the number of defects found in an end product – if you take advantage of the discipline.

Running tests almost for free is what makes automated testing so paramount to agile development. You can’t deliver often if you can’t test cheap and fast. And you can’t refactor if you have no safety net. A development that’s not iterative and evolutionary can’t be agile at all.

Going back to the schema of the introduction, here are the tests we will focus on in this section (green boxes).

Automated tests have the freedom to exercise small software components. To do so, they replace the environment of the System Under Test (SUT) with mocks and stubs, at any level. They are meant to run in virtual machines (or, someday, containers), which means they don’t run with the target embedded computer and they don’t run with the production OS (as they necessarily imply installing at least one testing dependency to run the tests and gather the results, and no dependency should be shipped in a production OS that is not required to operate the medical device, as this might increase risks regarding safety and cybersecurity). This freedom to mock collaborators of the SUT means it is possible to thoroughly test edge cases that are difficult or impossible to test by other means. This is especially important for programs that are meant to operate sensors and actuators and give life to an automaton, something that inherently has state: thanks to automated testing, you can easily test many configuration of the medical device, and simulate every possible error code of every possible sensor and actuator (at least at the level of the layers closest to the hardware, before combinatorics become overwhelming). You can also test what’s happing with a large variety of biological measurements or behaviors – even simulating phenomena that seldom happen in reality). Automated tests rock to achieve reliability.

Here are some guidelines on the use of the 3 main categories of tests that can easily be executed in the build: 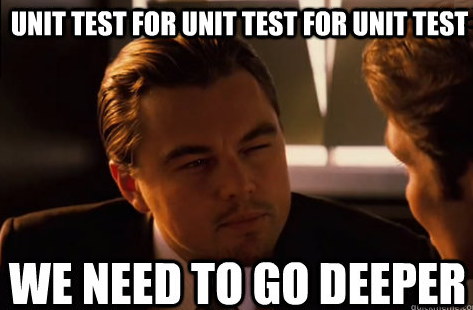 Working in a regulated industry, to fully take advantage of automated testing, you have to legalize it. To be suitable for use in the traceability system, all kinds of automated tests must be legitimated. This means that management plans and procedures need to introduce them properly, and that every tool in the chain must be documented, put in configuration control and formally validated. Tests have to reference requirement numbers in such a way that they appear in the tests results, which will feed the traceability matrix (for example, write the ids of the requirements covered by each test in NUnit’s Description attribute).

Give time for automated tests. Automated tests take time. If management doesn’t provide this time, they won’t happen by magic. A technique I find useful is to constantly repeat in planning poker sessions that automated tests are a mandatory part of the job, and that they should be part of the estimate. Difficult tests (such as automated load and stamina tests) must have a user story of their own, and with high estimates (these things are always a lot harder than they appear). As with all things related to long-running quality efforts, a constant care must be taken that will affect the sort-term velocity of the team. But everyone (up and down) has to get used to that velocity if it is required to write good, reliable, safe medical device software. One more reason to start it from the beginning: automated testing must be part of the natural rhythm of the team.

Time is the soil in which automated tests can grow. The ideal of quality is the seed. But what are the fertilizers you can use to make them flourish? Apart from technical factors that we’ll delve in soon, what is required is an automated testing culture.

Writing good automated tests must be pervasive in the development culture. Every developer should expect to create them and fix them when they’re broken. In fact, should developers be deprived from this constraint, they should find it unacceptable and fight hard to have automated tests introduced. In addition to this distributed responsibility, a dedicated team is useful to take care of the more difficult work regarding test: maintaining and polishing base test classes and shared stubs, updating libraries and introducing new ones when appropriate, spotting and annihilating sources of randomness in tests results, improving test performance, deleting obsolete or not-that-profitable old tests. Having tests that pass fast, deterministically and successfully (tests that are never left broken for long) makes a long way towards creating and expanding that automated testing culture.

Good KPI visible everywhere (including sprint reviews) can help. I’ve used the raw number of tests (motivating since always increasing, but not very meaningful), the number of tests created by iteration (a good indicator of the persistence of the practice in your team), the test coverage, the status of a few key and difficult tests.

Management should constantly show its care. By ranting about broken or random tests. By praising accomplishments (such as lowering the number of broken tests, fixing randomness, achieving victory with difficult load or stamina tests). By watching the state of the build. By investing the energy in building the culture and overcoming the necessary obstacles. By allocating time and resources to the endeavor.

Here are my favorite psychological tools to deal with broken tests.

A necessary condition for automated tests to exist is to have an architecture that makes writing them easy enough – let’s call it test-friendly architecture. This means a highly decoupled architecture: massive use of dependency injection is a key technique, mocks and stubs are required, onion architecture can also help. The interesting thing here is the reverse effect: once you seriously start your automated testing journey (hopefully at the beginning of the project), you find yourself adding interfaces to write test doubles (to mock the hardware, a remote server, the database…), injecting dependencies, using in isolation just a few classes (to keep the test lights and fast)… and the architecture gets better. Testing the software is much more demanding to the design that all these extension points you consider for the future. As Bob Martin coined it, “The act of writing a unit test is more of an act of design than of verification”.

You need a good continuous integration tool to run the builds. You need enough build agents to handle the load, ideally a cloud with dynamic provisioning. Build agents should be identical, hopefully frequently restored to a reference state to avoid drifting apart. But sometimes differences in configuration between build agents will be necessary to minimize license costs (for example, install expensive tool X used only for C++ static checking on agent A).

If you want developers to pay attention to broken tests and fix them, they should never break for no reason. A couple of hints to achieve better test predictability :

The best of all tools to protect tests is the gated commit. Developers submit their branches to the CI, which passes the required build scripts (including static checks and tests). If the build is good, the branch is merged. If not, the developer is notified but nobody else is disturbed (which in itself tames the natural mayhem of large teams with many commits and helps build a more relaxed and focused environment). The amount of tests to put in your gated commit criteria should be as high as your pool of build agents allows you to process in a short enough time – I think 12 hours would be my maximum here, ten minutes would be ideal but difficult to achieve with many tests. If you can put them all and your tests are truly deterministic, the build of the main branch will always be green! But be careful: sources of randomness in tests might block your entire delivery pipeline, make sure they are taken care of.

To set up a gated commit, you need a DVCS enough at merging that most automatic merges succeed most of the time (git is pretty good at this) and support from your CI (we used TeamCity and GitHub together to achieve gated commit with limited effort).